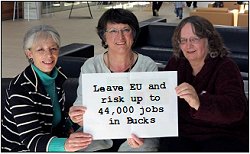 Will you help us protect the 3 million British jobs that depend on Europe?
UKIP want to put those jobs at risk by pulling us out of Europe. Only the Liberal Democrats are standing up for those British workers whose jobs depend on us being in Europe.

This is a really major issue in Milton Keynes.  We have lots of firms owned by european companies, who rely on easy traffic and transport of goods between their base here and Europe.  We have other firms whose main market is in Europe, and who don’t have to worry about import restrictions and trade agreements as a result. And we have still more firms that depend on european trade agreements to import their goods from countries world-wide. If we leave the EU, all that has to be renegotiated – and it can take years!