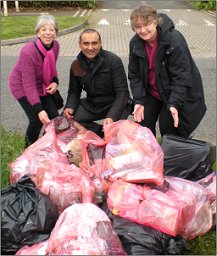 The Focus Team with some well-used pink sacks!

Residents have been left angry, without pink sacks, after the Tory Cabinet left the system in chaos over the last few weeks.

First – the Council ran out of pink sacks just before the really busy DIY and clear-out weekend over Easter!

Second, the Tories directed outlets to “hide” pink sacks behind the counter making residents who want extra sacks queue up to get a roll!

Third, Cllr Jenni Ferrans discovered that libraries had decided it was taking too much staff time, and refused to stock the pink sacks!  Parish Councils experience far more demand as a result, and they too stopped stocking them.  Many areas of MK were left with no supplier at all!

Following pressure from Cllrs Jenni Ferrans and Chris Williams, some libraries were directed to start stocking them again, so that there are now outlets in all areas.

Cllr Subhan Shafiq exclaimed “When the Lib Dems ran the Council we introduced the pink sacks.Now this Tory budget cut is putting recycling rates at risk, costing money in staff time and risking fines! This is madness!”

Cllr Vanessa McPake, Lib Dem spokesperson on the Environment committee is now asking the new Labour Cabinet to return to free unhindered access to pink sacks. She said ” One of our important polices to achieve high recycling rates was to make FREE pink sacks readily available so that there was no barrier to recycling.   The Government is now bringing in a higher target for recycling to ensure we meet international commitments.  It’s essential that residents can get pink sacks easily to achieve that!”

Next year’s pink sacks are due to arrive in August or early September.