We expect to find the odd discarded toy – but Cllr Vanessa McPake was amazed to find a trampoline discarded in Walton Park recently!  And nearby, Cllr Jenni Ferrans found the dog bin being used as a litter bin too!  The Focus team have asked for both to be cleared. 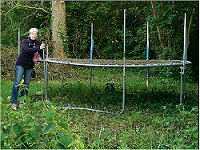