The Focus team has been walking the streets to check on the bushes, grass cutting and the weeds after a number of residents have complained.

On Kents Hill, Cllr Vanessa McPake disappeared under the weeds in Tunbridge Grove!
On Monkston Park, Cllr Jenni Ferrans could not walk down Queensbury Lane because of the overhanging trees and shrubs.

They have now asked that MK Council sort out the problems.  Cllr Vanessa McPake will be pushing the new Labour-run MK Council to get the weeding done and Cllr Jenni Ferrans will be pressing MK Development Partnership to maintain their reserved sites. 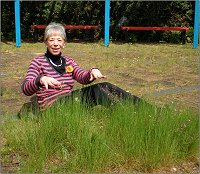