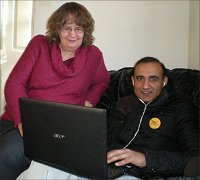 Like many people Cllrs Jenni Ferrans and Subhan Shafiq have fast broadband – but can you get it in your area?

BT published its plans recently for the government-funded fibre project and it’s mixed news for our area.  Fibre is needed to get even moderately good speeds, not just fast and superfast, in our area (because we’re a long way from the telephone exchange and copper wire broadband slows down with distance), so this will benefit a lot of people and it’s really important that everyone gets the option.

Fibre-optic broadband will be available to most households in our area that want it by 31st March and most of the rest during 2014.  But a few will wait longer, and some may not get it at all on this project. The details we know at present are below.

If you want to get fibre in your area, please:

It’s important to note that the schedule is NOT guaranteed.  The work may prove easier or more difficult than expected, so the overall timetable may slip, or individual small areas may be moved between phases.  At present, the schedule is:

3 thoughts on “Broadband Speeds Up at Last (for most!)”