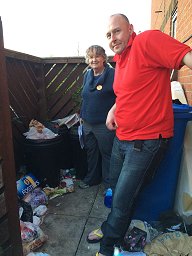 Cllr Jenni Ferrans has asked the Council to clear up the rubbish stores at the flats in Tenterden Crescent, Kents Hill

That’s the message from the Lib Dem Focus team to the Tory-run MK Council.
Residents say, “We pay our Council tax, why is the rubbish in bin stores and from broken sacks not being collected?”

The Lib Dem Focus Team has asked the Council to inspect the store at Birdlip Lane flats, and to make sure teams clear up when sacks burst.