The plans for the Walton Manor development, west of Walton Grange, between the H9 and Simpson Road, will go on display at SNAP in Bourton Low, Walnut Tree, on Wednesday 28th November, from 4pm to 8pm so that you can comment before the application is finalised.

The development will comprise up to 174 homes, and a much needed play area for the area.  A few homes will be accessed off Simpson Road, Walton Park, and the rest from Groveway, where we understand that a new roundabout is proposed at the OU junction.

You can see the brief the developers were given here – but they are free to propose other layouts if they want.

Please have a look and let us know of any concerns so that we can argue for changes.  Thank you.

The Council has published a new leaflet telling you what you can and can’t recycle.  Download it here.
Please note that the Council will not take ANY items left loose beside bins and bags except Christmas trees.

Items that can’t be recycled include plastic bags, film food wrappings and covers, and crisp packets.  Cardboard must be folded or torn up and put in the clear sacks. Any item left beside the sacks, including cardboard, can’t be recycled.  Dead birds and animals can only be put in green bins if they have no fur or feathers.  Wrap them and put them in black sacks otherwise please.
Please recycle as much as you can.  It helps the environment and keeps our council tax bills down!

Plan:MK, which will define the Council’s current plans for development until 2031, is out for consultation until 20th December.  An exhibition about it is at Kingston Library until Saturday 9th December.

The Plan includes catering for the number of houses that MK’s growing population will need, and a wide variety of jobs to go with them, with most new jobs in “knowledge based” sectors, and new schools, health centres, community centres, etc. in the new major development areas as well as a major expansion in CMK.  It will see MK’s population rise to 350-400,000 by 2031.

A number of small sites for development had already been approved in Monkston ward, including:

And very close to Monkston ward:

A few additional sites in Monkston ward are now proposed in Plan:MK:

All of these sites had previously been reserved for future development, and the Walnut Tree ones were in the Neighbourhood Plan, although Walton Community Council wanted a day nursery and more parking as part of the Wadesmill Lane site.

All in the Neighbourhood Plan.

Please have your say on the proposals by 20th December 2017.  The changes that can be made at this stage are limited, but if you have serious concerns about any of it please let Cllr Jenni Ferrans know, as well as responding formally, and we will see whether we can alleviate the issues. 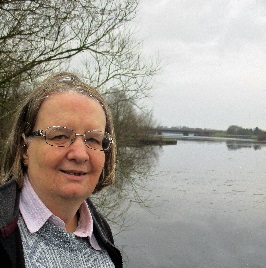 Jenni Ferrans listens to the noise across Caldecotte Lake.

Residents in some parts of Walton Park have been hearing a lot more noise from the H10 recently – while others nearer the road are hearing nothing more than usual!  The Focus team has looked into it.  It is mainly due to the Parks Trust severely cutting back some trees, increased traffic and partly weather conditions leading to extra noise across the water. 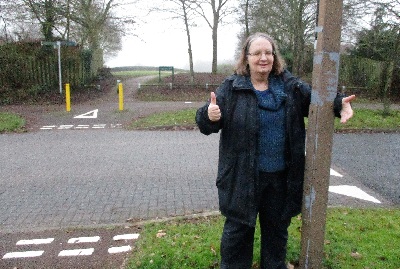 Jenni checking out the site on Simpson Rd near St Bartholomews.

Cllr Jenni Ferrans has arranged for a new dog bin to be put at this key redway junction in Simpson Road, Walton Park, as so many dog users go across to the lake.  And the dog bin at the entrance to the lake near Wadesmill Lane will be replaced by a larger one.  She has used some of her councillor’s budget to pay for them.  Thanks to Walton Community Council who agreed to install them and – very importantly – to empty them!

In a shock decision, after Government interference, MK’s Labour Cabinet has decided to give the Government the whole say over who manages all our new schools including Kents Hill Park Primary. 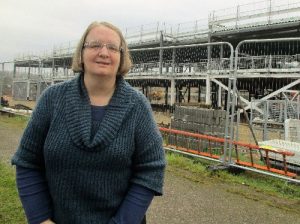 But the earliest the Government can appoint managers is Autumn 2017 – too late for the 2017-18 school year, and the Government’s last appointment was an academy that has failing schools!  Oakgrove School has offered to accommodate the extra children in 2017-18.

Your Lib Dem councillors think MK Council should still go ahead locally with the primary school, to get it open on time, with a good academy managing it.

Please sign our petition or ask us for a paper petition, quickly, if you agree!

There have been reports over the last few weeks of a dangerous dog accompanied but off the lead.

This is attacking other dogs, and sadly, occasionally people, around Caldecotte Lake and on Walnut Tree.  The dog is a black and white heavy-set dog.  If you witness an attack of this sort, please ring the police immediately.  It DOES warrant 999.  Unless the Police can catch the owners, they can’t take action.

Please remember that ALL dogs should be kept on leads when on paths. Dogs who jump up at people can be a danger, even if they are friendly and well-behaved.

We have three sets of voting going on soon locally.

On May 5th we have the election for councillors on Milton Keynes Council.  You can see the Lib Dem Manifesto for Milton Keynes here. 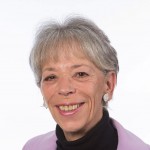 Our local candidate is Cllr Vanessa McPake, who has served this area as a councillor or campaigner for ten years, and is standing for re-election as a councillor.  She is now campaigning to:

Also on May 5th we have the election for a Police Commissioner.  This is the elected person who oversees the Police in the whole of Thames Valley.  Lib Dems believe that one person cannot possibly represent the interests of such a wide area, but that is the system we have, so we have to work with it at present.

Our candidate is John Howson, who is campaigning to cut crime, not constables!  He points out that if we can use modern methods to increase detection rates, and use the best methods of dealing with each category of offender to reduce reoffending, then we will reduce crime without needing to spend more!  Win-Win!

You can see more about his campaign on the Thames Valley Police website at https://www.choosemypcc.org.uk/area/thames-valley

Finally, on June 23rd we have the big one – the referendum on whether to Remain In the EC or to Leave the EC.  You can see the Lib Dem party comment on this here.  After the Council elections, we’ll put more on this website about the issues for Milton Keynes.